MCK Construction was crowned Overall Winner at the 2019 Master Builder Awards for the renovation of a 120-year-old coastguard tower. Director Tom McCrank talks about the stunning project and what the win means for the business.

MCK Construction, based in Montrose, Scotland, celebrated 10 years in business earlier this year and what better way to mark that milestone than winning Best Large Renovation Project and Overall Winner at the 2019 Master Builder Awards? Second generation builder Tom McCrank set up as a sole trader in 2009 and the company has grown steadily, also winning the Heavenly Builder and Commercial categories at the Scotland Master Builder Awards in 2017 but the Usan Coastguard Tower is the jewel in its crown.

MCK Construction worked with Garry Adam Chartered Architect to renovate the 120-year-old tower on the exposed North Sea coast, which was once a lookout post, housing the local rocket rescue equipment used to recover struggling mariners.

The client – a local fisherman whose family have fished the adjacent waters for generations – bought the tower in the hope of restoring it to its former glory, following years of neglect. The team worked closely with local planning authorities to ensure the building’s design was sympathetic to its history and the surrounding landscape. The project combines old and new, contrasting the original stone building with blue zinc cladding and has a huge front gable with 360-degree panoramic views.

While its cliff-top location brings a wow factor, the isolated setting also posed challenges. “The only access was to the rear of the building up a narrow path, so we had to put a temporary access road in the nearby field,” explained Tom. “We were on a cliff beside the North Sea and it was built over the winter, so the weather played a part and it wasn’t the cosiest of locations.”

"Entering the Master Builder Awards was a straightforward process," said Tom, and he would encourage all members to give it a go. “It seems quite daunting but the form is set out in a logical order and you don’t need war and peace, just write what it needs and it is so easy to get good quality pictures on site with a smartphone,” he said. “Just do it, don’t ponder. You have got nothing to lose but a bit of your time, and everything to gain. When we set out on that journey, we never dreamed in a million years that we would have won.”

The win has helped to raise the profile of MCK Construction and build trust among clients, as well as boosting morale among staff, indicated Tom. “It was absolutely amazing to win the category but to win the overall thing was never, ever on the radar to be honest with you,” he said. “The team just about flipped the table when we were down in London... It is definitely something I would encourage everyone to enter.”

As the Overall Winner, Tom also received keys to a new Isuzu D-Max Utah Pick-Up vehicle worth more than £30,000 thanks to the headline sponsor of the awards, Isuzu, and a £1,000 cheque for his client.

"Isuzu are proud to be the headline sponsor of the overall Master Builder of the Year Award, it's integral to our fantastic partnership with the FMB. MCK Construction's entry stood out because of the history of the building, the innovative use of space and materials, as well as having to overcome many real challenges to deliver an awesome project. We wish them all the best in their thoroughly deserved prize of a new Isuzu D-Max Utah.” 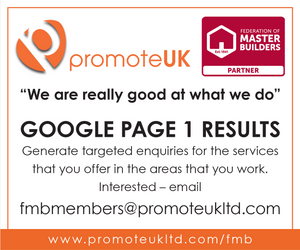 Setanta Construction Ltd has been awarded Building Company of the Year for not only overcoming tough challenges in recent years but thriving as a company and an employer.

Coldwells Building Company Ltd first encountered the property in Aberdeenshire as a tumbledown shambles of croft buildings, but amidst the neglected site this Master Builder and their client recognised the potential for a stunning family home.