For the Raynes Park Vale Football Club (RPVFC) it was a ‘save’ at home from the Kisiel Group volunteers and a ‘win’ away for the football team against Ash United. 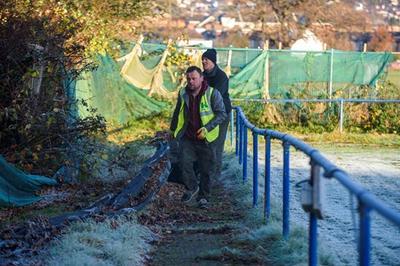 On a crisp frosty Saturday morning, a team of volunteers from a local Member of the Federation of Master Builders, Kisiel Group, turned up to spend the day working on much-needed improvements to the RPVC grounds in South West London. Clearing brambles and overgrown vegetation around the football pitch, re-positioning the existing boundary fence behind the floodlights and removing several skip loads of rubbish from the grounds were just some of the jobs that were undertaken. The hard-working volunteers also installed over 100 metres of new fencing donated by Kisiel Group.

Paul Bentley, the Chairman of the Club, explained that without the help from these dedicated volunteers undertaking the essential works detailed on a ground repair list issued by the League, the RPVFC would have ceased to exist as at the 31 December 2017. He said ‘An unbelievable effort, we owe them everything’.

Lukasz Kisiel, as Managing Director of his Raynes Park based building company, strongly believes in supporting the local community and was keen to help when approached by RPVFC.

Lukasz said “It is extremely important to save this local football club as it helps the community to keep active and to enjoy sport locally. I am very proud of my team for volunteering to use their construction skills for the club. They are my ‘heroes in action’ helping the local community to make our environment even more enjoyable for both RPVFC and other members of the public who use the surrounding area for recreational activities.”

Lukasz is organising for further repairs to be undertaken by his skilled team during December in conjunction with Dominic Tait, a Club supporter and volunteer who co-ordinates access to the club grounds. This will ensure that all repairs to the stand seating, removal of moss from the pathways round the football pitch and repairs to the club house are completed by the League deadline.

How this Master Builder company became a local superstar

Starting from a bedroom with a laptop, to becoming so highly recommended right on their doorstep that they now only accept work within a radius of their HQ.