London-based Master Builder Woods London Ltd, in collaboration with Coffey Architects, transformed this central London flat into a modern, spacious living space that celebrates the historic features of the property.

Built in the 1800’s on the site of a former palace of King Henry VIII’s, this Grade II-Listed Building was originally constructed as the Hugh Myddelton School. It underwent a transformation in the early 21st century when it was converted into a residential and commercial property. Woods London ensured that the history of the property shines through in the refurbishment, with the main living space retaining the original Victorian windows, glazing, and cornicing. 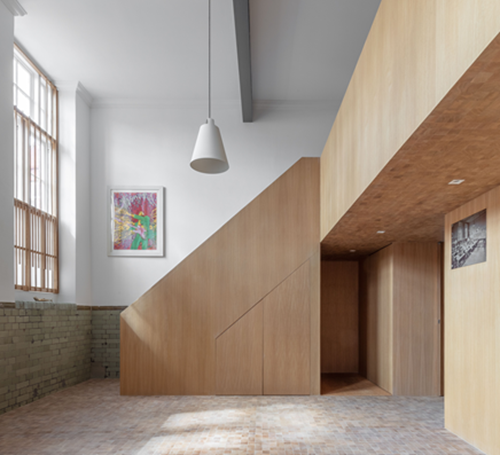 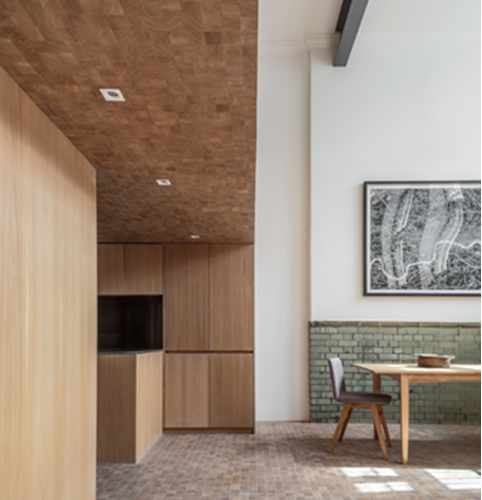 “We had a picture of a day in the classroom when it was in use in late 1800 early 1900, we recessed it into one of the oak wall panels. We also found a penny wedged in the original parquet floor, apparently this used to be done for luck, so we kept the penny safe and recessed it into our floor”.

The two-storey flat, designed as a solid piece of joinery that ‘fills’ into the original double-height void. It was built using 30,000 individual blocks of PAR oak, which form the main rooms of the flat and features an impressive oak ceiling and floor.

A great deal of time and care was put into crafting and fitting the individual blocks, as explained by Woods London director Edward McBeath:

“The 30,000 blocks were cut by us on-site from lengths of PAR oak, each block needed to be exactly the same as it would be impossible to sand the end grain oak when it was laid. The blocks are not randomly laid either, they line up with all the cabinets and continue up the stairs. The ceiling took a carpenter one month. The rest of the cabinets, kitchen, screens, and shutters were fabricated on-site by myself and my team of carpenters”. 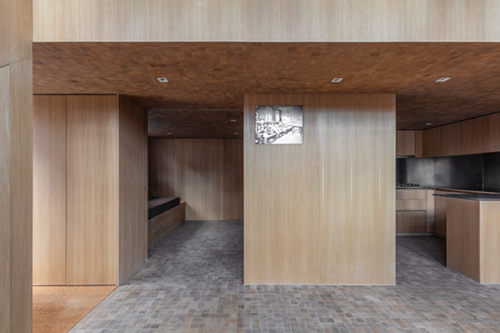 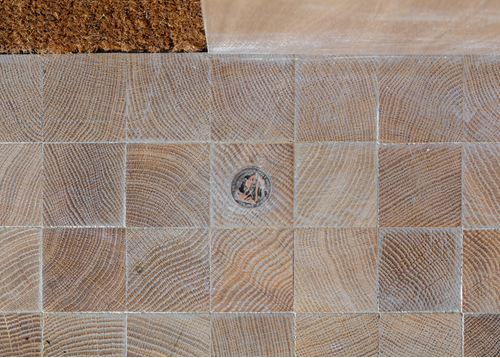 The property features a hand-crafted contemporary kitchen and flexible dining room, which can be converted to a second bedroom if required. Upstairs on the mezzanine second floor, Japanese-inspired sliding screens separate the main bedroom from the office space, which overlooks the double-height living area. Large sash windows flood the flat with light, but the clever use of timber shutters lined with translucent linen ensures the occupants privacy is not compromised.

The contemporary design and clever use of space has transformed this once dark and uninviting flat into a light and spacious home, which celebrates the building’s rich history.