We are calling for a national retrofit strategy that sets out how to upgrade the country’s housing stock.

While the UK as a whole has made a legal commitment to achieving net-zero carbon emissions by 2050, the four countries in the union are adopting different policies in support of that aim. Here’s how the land lies...

There are few issues that will be higher up the agenda for governments, businesses and individuals over the coming years than that of climate change. For those working in the building sector, the UK’s net-zero carbon commitment means greater use of new technologies and energy-efficient measures to reduce carbon emissions and wasted energy.

While relatively easy to achieve in new build properties, the task is more challenging in older buildings. Government predictions suggest 85% of existing homes will still be standing in 2050, while houses account for around 20% of the country’s total carbon emissions. The Government says there are currently eight million lofts that need insulating, five million uninsulated cavity walls, and 20 million uninsulated floors that need upgrading if the net-zero target is to be met.

This means a significant amount of work for builders, installing insulation, double glazing and new heating technologies, but the FMB believes public investment is needed to boost this market. It is calling for a national retrofit strategy that sets out how to upgrade the country’s housing stock. It is also calling for greater investment in upskilling builders, and the bringing-forward of the full £9.2 billion pledged in the Conservative Party manifesto to help build the market for energy-efficiency improvements.

For the UK to be successful in hitting its net-zero carbon emissions targets, it is vital that all four home nations play their part, and the situation differs significantly across these territories. 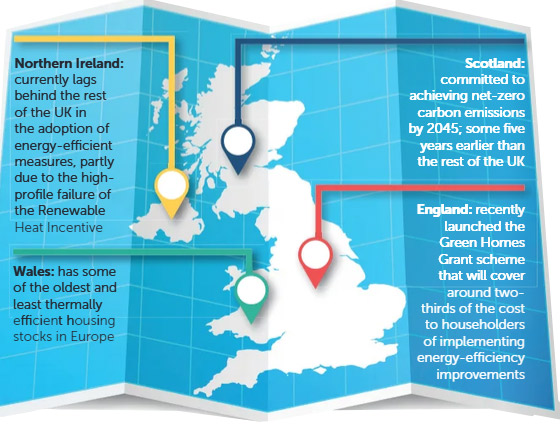 In Scotland, building stock tends to be relatively old but the Government has made energy efficiency and decarbonisation a central part of its programme to boost the nation’s financial and physical health, through better ventilation, and reduce the pressure on the NHS. It is also committed to achieving net-zero carbon emissions by 2045; some five years earlier than the rest of the UK.

The Government is relaunching its Energy Efficiency Scotland programme. “We expect more details soon on how this will impact industry and what funding sources are available, as well as the training and upskilling provision, which is absolutely critical,” says Gordon Nelson, Director of FMB Scotland. It is calling for a particular focus around developing skills needed to perform the role of retrofit coordinator, he adds, but previous initiatives such as the Urban Energy Scotland scheme mean Scotland has a head start in identifying what is required and developing talent accordingly.

One area where there is room for improvement is in generating the buy-in of both homeowners and occupiers. “There’s not enough demand out there among the occupiers for retrofit energy-efficiency measures, and the payback period just isn’t there,” adds Nelson. “Someone who is doing an extension or conversion is more minded to look at things like the granite kitchen worktops and interiors than energy efficiency measures and payback periods.”

It’s also essential that those working in this space can undertake installations to the required standard, he adds. Although he warns that making any threshold too high could put off competent installers concerned about additional bureaucracy. The FMB is calling on the Scottish Government to explore whether the Scottish National Investment Bank, which was launched in November 2020, could set up a VAT rebate fund for renovation and domestic works, which would include energy-efficiency gains.

Wales, meanwhile, has some of the oldest and least thermally efficient housing stocks in Europe, says Ifan Glyn, Director of FMB Cymru. “A third of the stock was built before 1919, when no consideration was given to the thermal performance of homes, and only a tenth of homes were built in the last 20 years, during which time energy performance requirements have increased exponentially,” he points out.

The Welsh Government has committed to tackling the issue and has accepted the findings of an advisory group made up of different representatives from the construction sector, including the FMB. The ‘Optimised Retrofit Programme’ (ORP) aims to create a long-term strategy which will avoid the type of “boom and bust” schemes that have operated previously. The first stage involves improving the  energyefficiency of social housing. “Social housing is viewed as the ideal place to trial methods and technologies before rolling out a programme to private dwellings,” says Glyn. As well as the installation of technical measures, the scheme will also improve processes around surveying, finance, procurement and, crucially, the monitoring of results. “It is also about the creation of opportunities for local supply chains, not just to provide labour through bread and-water contracts but opportunities for small local building firms to upskill and to grow,” adds Glyn.

As well as its role in the ORP, FMB Cymru sits on an implementation group set up to
help decarbonise existing homes.

Northern Ireland lags behind the rest of the UK in the adoption of energy-efficient measures, partly due to the high-profile failure of the Renewable Heat Incentive, which is estimated to have cost taxpayers around £500 million before being shelved in 2016.

“The scars of the fallout from that are still there,” says Gavin McGuire, Director of FMB Northern Ireland. “Sadly, that has tarnished anything else related to energy saving and retrofitting. We want to use the work that is being done in other nations to lobby hard on this issue.” There are a number of departmental consultations on energy, but no clear retrofit strategy, he adds.

FMB Northern Ireland is continuing to work on raising awareness and is currently consulting on an evidence paper from the Department of Economy.

In England, much of the focus is around the Green Homes Grant scheme; a new £2 billion government scheme that will cover around two-thirds of the cost to householders of implementing energy efficiency improvements, up to a limit of £5,000. Lower-income applicants can cover the full cost, up to £10,000.

The FMB was instrumental in helping to secure the introduction of the scheme as part of the UK Government’s ‘build back greener’ agenda, as well as the creation of a more straightforward path for FMB members to gain the required accreditation to take part in it. More recently, it has secured an extension of the scheme to the end of March 2022.

The FMB has also called for the Government to go further if the UK is to achieve a net reduction of 68% of carbon emissions by 2030. It is collaborating with other organisations in the construction sector to develop their own national retrofit strategy. This has now been officially adopted by the Construction Leadership Council (CLC), and will be presented to the Government for their backing.

“With construction’s recovery slowing and employment in the sector continuing to fall, now is the time for the Government to take action and instigate a national retrofit strategy,” says Brian Berry, Chief Executive of the FMB. “This would stimulate work and employment throughout the sector, while supporting the Prime Minister’s latest carbon emission reduction targets.

“2021 should be seen as a year of significant opportunity to move the dial further  towards net-zero and build back greener,” he adds. “A national retrofit strategy would provide economic, environmental and social benefits throughout all regions.” 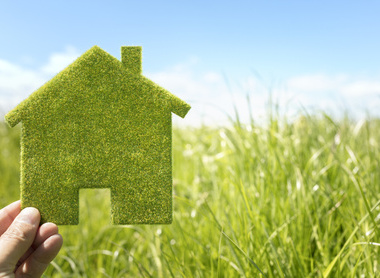 If we are to tackle climate change, we need to make our homes greener and we are committed to the role SME builders have in delivering this.

Read more about our campaign 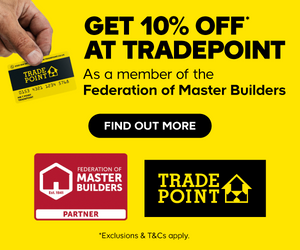 More on Retrofit and green initiatives

In response to the Government’s announcement on nutrient neutrality measures the Federation of Master Builders (FMB) welcomes the new rules, but cautions that they should not add extra burdens to small, local house builders.

Get involved in the Green Home Festival

FMB Scotland has previously been involved in the Edinburgh Festival Fringe. This year, we are going further in delivering the Green Home Festival with one member playing a key role in it.